Have you excited to watch Saif ali Khan and Shahid kapoor together? then your dream come true. Yes, In Rangoon they both working together for the first time. Here we share Rangoon movie latest news, star cast, first look, poster and trailer.

‘Rangoon’ is an upcoming bollywood period romance drama film. Rangoon’ movie is directed by very talented director Vishal bhardwaj who has already given us the superhit movies like “Omkara” and “Haider”. Rangoon is produced  by Sajid Nadiadwala, Vishal bhardwaj, Rekha bhardwaj and Siddharth roy Kapoor. Rangoon is a period film which was set in world war-2.

This film is starring

‘ Rangoon is finally scheduled to release on 24th of February 2017. Trailer of ‘Rangoon’ will release on 6th of January 2017. Both of three lead actors Saif ali Khan, Shahid kapoor and kangana ranaut is worked first time together with this film. 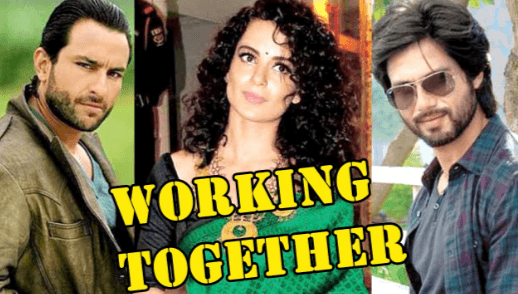 Saif ali Khan and shahid kapoor has already given us the fantastic movies in 2016 as “Phantom” and “Udta punjab” resrespectively but 2016 was not good for kangana ranaut because her film “katti-batti” was super flop at box office and getting negative reviews from critics and public also. So now let’s see how rangoon will perform at box office, Will it hit the box office ?, Will it can get positive reviews from critics and public ? For this we have to just wait and watch. Foe get more updates about this movie stay with us.